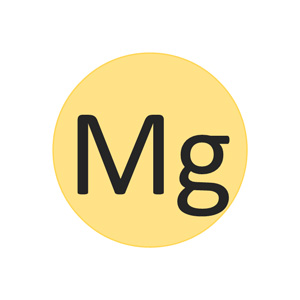 Magnesium has a number of key functions in plants. Particular metabolic processes and reactions that are influenced by Mg include: 1) photophosphorylation (such as ATP formation in chloroplasts), 2) photosynthetic carbon dioxide (CO2) fixation, 3) protein synthesis, 4) chlorophyll formation, 5) phloem loading, 6) partitioning and utilization of photoassimilates, 7) generation of reactive oxygen species, and 8) photooxidation in leaf tissues. Consequently, many critical physiological and biochemical processes in plants are adversely affected by Mg deficiency, leading to impairments in growth and yield. In most cases, the involvement of Mg in metabolic processes relies on Mg activating numerous enzymes. An important Mg-activated enzyme is the ribulose-1,5-bisphosphate (RuBP) carboxylase, which is a key enzyme in the photosynthesis process and the most abundant enzyme on earth. 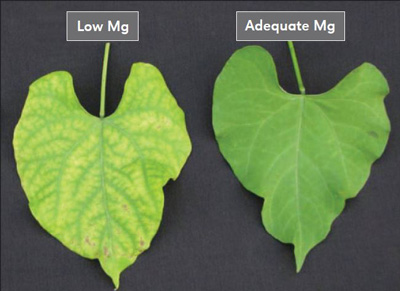 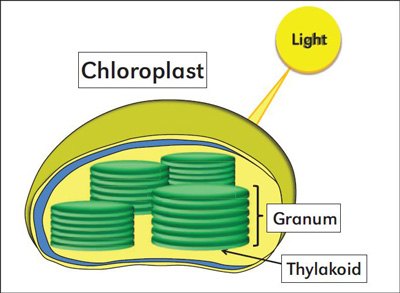 Figure 2. Chloroplasts are the organelles that host thylakoids, the Mg-containing compartments where light energy is converted to chemical energy through the process of photosynthesis.

Leaf yellowing in the form of interveinal chlorosis on older leaves is one of the typical symptoms of Mg deficiency stress (Figure 1). It is reported that up to 35% of the total Mg in plants is bound in chloroplasts (Figure 2). However, the appearance of Mg deficiency symptoms is highly dependent on light intensity. High light intensity increases the development of interveinal chlorosis, together with some reddish spots on the leaf blade (Figure 3). Therefore, the well-documented differences between plant species in the expression of visual Mg deficiency symptoms and also in critical deficiency concentrations of Mg in the leaf tissue may be related to the light intensity in a particular growth environment.

The leaf damage that occurs in Mg-deficient plants exposed to high light intensity has been ascribed to enhanced generation of damaging highly reactive oxygen species in chloroplasts at the expense of inhibited photosynthetic CO2 fixation. Plants growing under conditions of high light intensity appear to have a higher requirement for Mg than the plants grown under lower light intensity.

Magnesium Deficiency Is a Growing Problem

Despite the well-known role of Mg for various critical functions, there is surprisingly little research activity on the role of Mg nutrition in crop production and quality. Hence, Mg is often considered a “forgotten element”. However, Mg deficiency is increasingly becoming an important limiting factor in intensive crop production systems, especially in soils fertilized only with N, P, and K. In particular, Mg depletion in soils is a growing concern for high-productivity agriculture.

Due to its potential for leaching in highly weathered soils and the interaction with Al, Mg deficiency is a critical concern in acid soils. One of the well-documented plant adaptation mechanisms to acid soils is the release of organic acid anions from roots. Organic acid anions released from roots will chelate toxic Al ions and form Al-organic acid complexes that are no longer phytotoxic. It is well-documented that Mg is required for effective release of organic acid anions from roots to modify an Al-toxic rhizosphere (Yang et al., 2007). Like Mg, Ca is also important in alleviating Al toxicity in acid soils. However, Mg can be protective against Al toxicity when added in micromolar levels, while Ca exerts its protective role in millimolar concentrations (Silva et al., 2001). This result indicates Mg has very specific benefits in protecting against Al toxicity.

Figure 3. Symptoms of leaf chlorosis in Mg-deficient bean plants grown at high light intensity. The green portion of the leaves was partially shaded with filter paper. With an adequate Mg supply, high light did not cause any leaf chlorosis (Cakmak and Kirkby, 2008).

In view of diverse functions of Mg in plants, a question arises as to which function or structure is affected first under Mg deficiency. The most common answer was chlorophyll level, or photosynthesis, or protein synthesis. There are a few studies published previously by Cakmak et al. (1994) in common bean, Hermans et al. (2004) in sugar beet, and Hermans and Verbruggen (2005) in Arabidopsis that provide a clear and convincing answer to that question, as discussed below in this short review paper.

Hermans et al. (2004) grew sugarbeets with either a low or an adequate Mg supply and analyzed 1) plant growth, 2) photosynthetic CO2 fixation, 3) chlorophyll concentrations, 4) photosynthetic electron transport and 5) leaf concentration of sucrose. The results obtained were clear: before any noticeable or significant change occurred in the first four measurements, there was a large accumulation of sucrose in the fully expanded leaves of the Mg-deficient plants. Magnesium-deficient leaves accumulated up to 4-fold more sucrose when compared to the Mg-adequate leaves, indicating a severe inhibition in sucrose transport out of the Mg-deficient leaves.

Cakmak (1994 a,b) studied the role of Mg nutrition in 1) shoot and root growth, 2) concentration and distribution of carbohydrates among root and shoot organs, and 3) phloem export of sucrose in bean plants. Results showed pronounced inhibition of root growth before any noticeable change in shoot growth and chlorophyll concentration. Consequently, the shoot: root ratio for both bean and wheat plants increased in Mg-deficient plants (Figure 4). This early negative effect of Mg deficiency on root growth before the development of visible leaf chlorosis is a critical issue for growers because of the importance of a good root system for plant production. Therefore, special attention should be given to the Mg nutritional status of plants before the development of any visible deficiency symptoms.

Accumulation of carbohydrates in fully-expanded leaves is a common phenomenon with Mgdeficient plants. At the beginning of Mg deficiency and under severe Mg deficiency, Cakmak (1994 a, b) found that older leaves contained 3.5-fold and 9-fold more sucrose, respectively, compared to the Mgadequate plants. Magnesium-deficient leaves also contained elevated amounts of starch and reducing sugars. In bean plants grown with a low Mg supply for 12 days, only 1% of the total plant carbohydrates were found in roots, whereas in the Mg-adequate plants, this value was 16%. All these results clearly indicate a severe inhibition in phloem export of sugars out of Mg-deficient leaves.

Phloem exudates were collected from bean plants with low and adequate Mg supply to study the role of Mg nutrition on the movement of sucrose out of the leaf. Magnesium deficiency resulted in severe and very early inhibition of the phloem transport of sucrose (Figure 5). There was an inverse relationship between sucrose concentration in leaf tissues and the sucrose export rate in phloem during the 12 days of Mgdeficiency treatment. The inhibitory effect of Mg deficiency on sucrose transport via phloem occurred before any adverse effect on shoot growth. Re-supplying Mg to the deficient plants restored the phloem export of sucrose within 12 hours.

High carbohydrate accumulation coupled with inhibited phloem export of sucrose from Mg-deficient leaves show the importance of maintaining adequate Mg nutrition of plants during periods of intensive carbohydrate transport from leaves to the growing cells. Sufficient Mg is required for maximizing the carbohydrate transport into sink organs (such as roots and seeds) to promote high yields. Maintenance of adequate Mg nutrition at the late growth stages is also essential for minimizing generation of harmful reactive oxygen species and photooxidative damage in chloroplasts. The application of late-season Mg through fertilization or foliar sprays may be useful in some circumstances. The impairment in root growth due to Mg deficiency may have also serious impacts on uptake of mineral nutrients and water, especially under marginal soil conditions.

Producing plant-based biomass as a renewable energy source is a growing and promising alternative to fossil fuel. But the productivity of these systems is directly dependent on 1) the capacity of plants to fix CO2 into organic carbon (C) through photosynthesis, 2) translocation of the assimilated C from source into sink organs, and 3) utilization of assimilated C in the sink organs for growth. All of these steps are specifically controlled by Mg. Therefore, attention must be directed to the Mg nutritional status of biofuel plants in order to achieve high biomass production and partitioning of the assimilated C in the desired plants organs (such as grains or roots).

Magnesium has long been noted for its essential role in chlorophyll formation and photosynthesis. However, growing evidence shows that sink organs (such as growing roots and developing seeds) are also severely affected by Mg deficiency. For too long, Mg has been a forgotten element for crop production, but its vital role is increasingly being recognized in plant nutrition.

Dr. Cakmak (cakmak@sabanciuniv.edu) and Dr. Yazici are with the Faculty of Engineering and Natural Sciences at Sabanci University. Istanbul, Turkey.